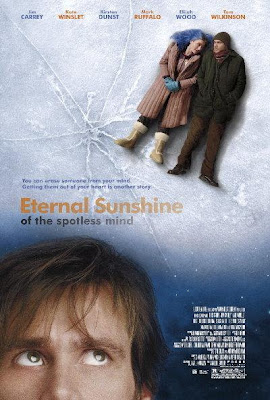 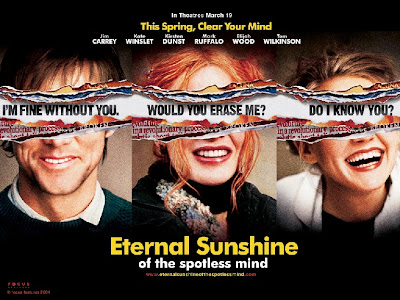 The idea for the film was brought to Michel Gondry by his friend the artist Pierre Bismuth who suggested, "You get a card in the mail that says: someone you know has just erased you from their memory..."

The memory-erasing company "Lacuna Inc." takes its name from the Latin word "lacunae" meaning a cavity, hollow, or dip, especially a pool or pond. On medical imaging a "lake" is seen as a hole filled with fluid within the brain after some strokes and seizures. These tiny "holes" can result in symptoms, such as memory, sensory, and motor dysfunction and is perhaps a reference to the "brain damage" that results from the procedure in the film.

To help promote the movie, a fully functional website was created for Lacuna (http://www.lacunainc.com) purporting to provide memory erasure. [It still runs and it's pretty cool!] The only giveaway is the link to watch Joel Barish "experience the procedure", which links to the movie's official site.

The movie title is based on the following quote from the poem "Eloisa to Abelard" by Alexander Pope (1688-1744): "How happy is the blameless vestal's lot! The world forgetting, by the world forgot. Eternal sunshine of the spotless mind! Each pray'r accepted, and each wish resign'd;". The poem was also used in Charlie Kaufman's earlier project "Being John Malkovich" (1999).

Despite the fact that Charlie Kaufman's script and Michel Gondry's visual concepts were closely followed, the actors were allowed many chances to improvise. Elijah Wood and Mark Ruffalo improvised extensively, and much of the dialog between Jim Carrey and Kate Winslet resulted from videotaped rehearsal sessions during which the two actors became close by sharing tales of their real life relationships and heartbreaks. 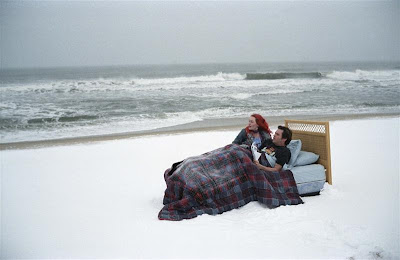 Michel Gondry had a unique system of controlling his camera operators while shooting by use of a headset for Michel and earpieces for the two operators. He would speak to them (in french) while cameras were rolling and the actors were doing their parts, so Gondry could have a say on all angles no matter where the actors were. This results in a large degree of spontaneity, since the actors could decide while in character whether to have an entire conversation sitting on a couch or get up and walk to a window. Kate Winslet said that she felt this freedom enhanced her performance (her career's favorite, as she mentioned in Empire Magazine) and that sometimes they would do different takes of the same scene completely differently, based purely on gut feelings for what the characters might have done.

The scene where Joel and Clementine watch the circus go through the streets was made up on the spot, as the film crew and cast happened to be working nearby and Michel Gondry decided it could work well in the film. The part where Clementine disappears suddenly is one of Gondry's favorite moments of the film, as Jim Carrey didn't know Kate Winslet was going to disappear and Gondry likes it because Carrey's face appears so saddened. When the sound blanks out in the final film, Carrey is actually saying "Kate?"

When Joel is in his head and is visiting his session of the erasing process, no special effects were used to show the two Joels in the one scene. Jim Carrey had to take off his hat and jacket when he was not in shot and had to quickly sit down in the chair and visa-versa when he has to stand up.

Virtually all of the most bizarre and fascinating scenes in this movie were created with old fashioned camera, editing, lighting and prop/set tricks. The use of digital effects was very limited. The striking kitchen scene with Joel as a child was created with an elaborate forced perspective set-up similar to some used by Peter Jackson in the "Lord of the Rings" trilogy.

Initially throughout the train scene, the music was supposed to fill up the gap during the silence between Joel and Clem until writer Charlie Kaufman suggested to do the opposite. Music was then played when Joel and Clem talked and paused when they paused.

The opening credits appear 18 minutes into the film, at the end of the first reel.

Question: Do you envision all of the films you've been involved in existing in the same universe? Obviously there's a direct connection between "Being John Malkovich" and "Adaptation"... but do Joel [Jim Carrey] and Clementine [Kate Winslet] share a world with the Kaufman twins too?

Charlie Kaufman: I like that question. I don't consciously think about that, but yeah, in my brain, I guess it does. In the original screenplay for "Sunshine", Lacuna offices were in the same office that housed the 7 1/2 floor for "Malkovich". So maybe I do think that. But I don't limit myself by that. I wouldn't make a decision not to do something because it would conflict with another screenplay I've written.


Question: While you are writing, how do you keep track of your timelines, characters and plot arcs? Index cards? Flow charts? NASA computers?

Charlie Kaufman: I don't use anything like that. I keep it in my head. And I'm living with it so much, after a while I understand it. I often buy index cards or I get a very neat new notebook -- when I was writing "Adaptation" I color-coded a lot -- but I lose interest and patience and I just kind of wing it. I'm not an organized person.
Posted by: s_dany @ Sunday, April 26, 2009